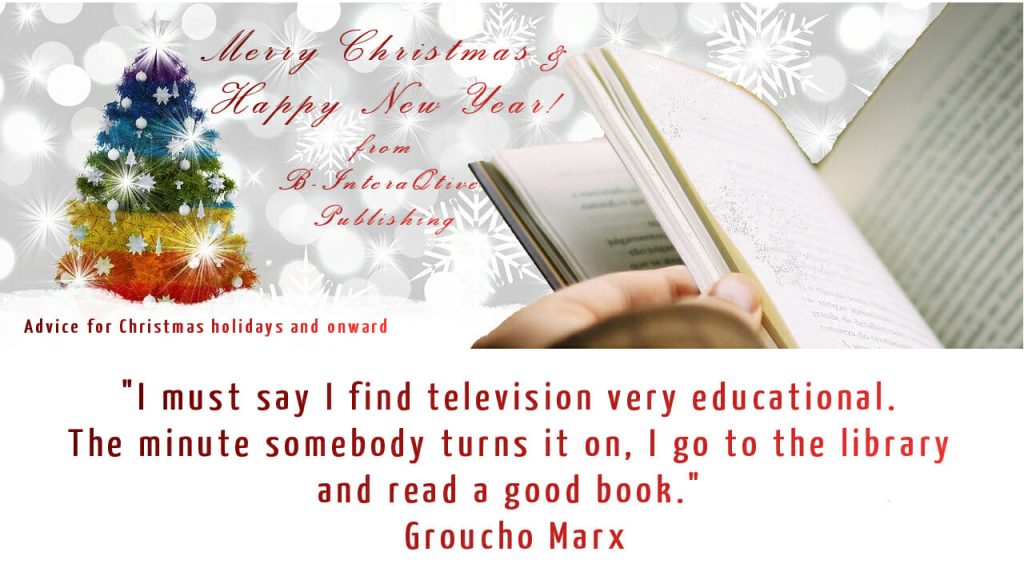 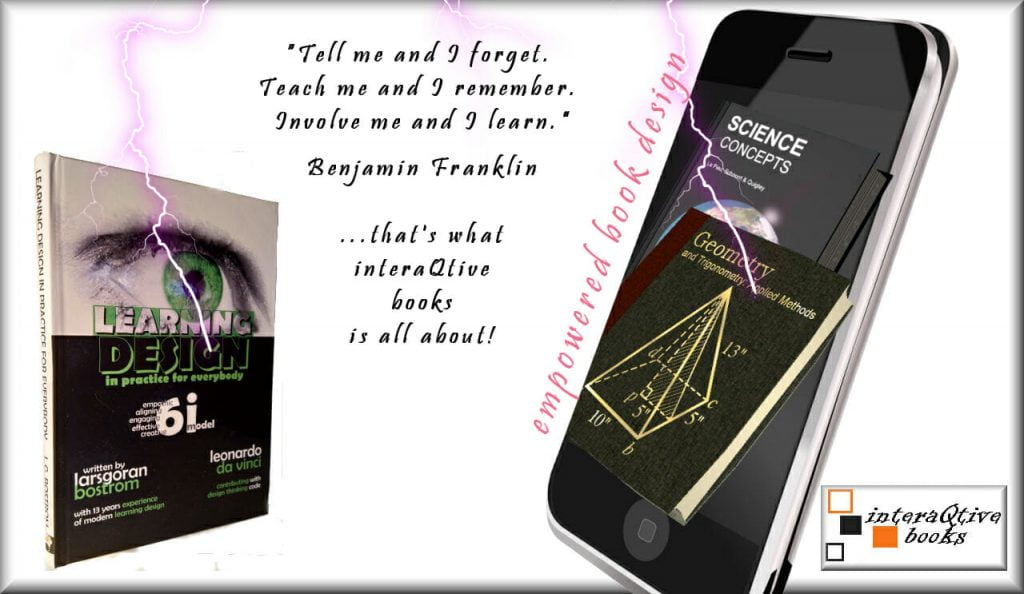 The book “Learning Design in Practice for Everybody” by LarsGoran Bostrom is available in a printed hardcover edition and as ebook. You can buy it directly from the publishing house in BiQStore – eBook or hardcover. The ebook is also available in many bookstores allover the world, click here for more information. 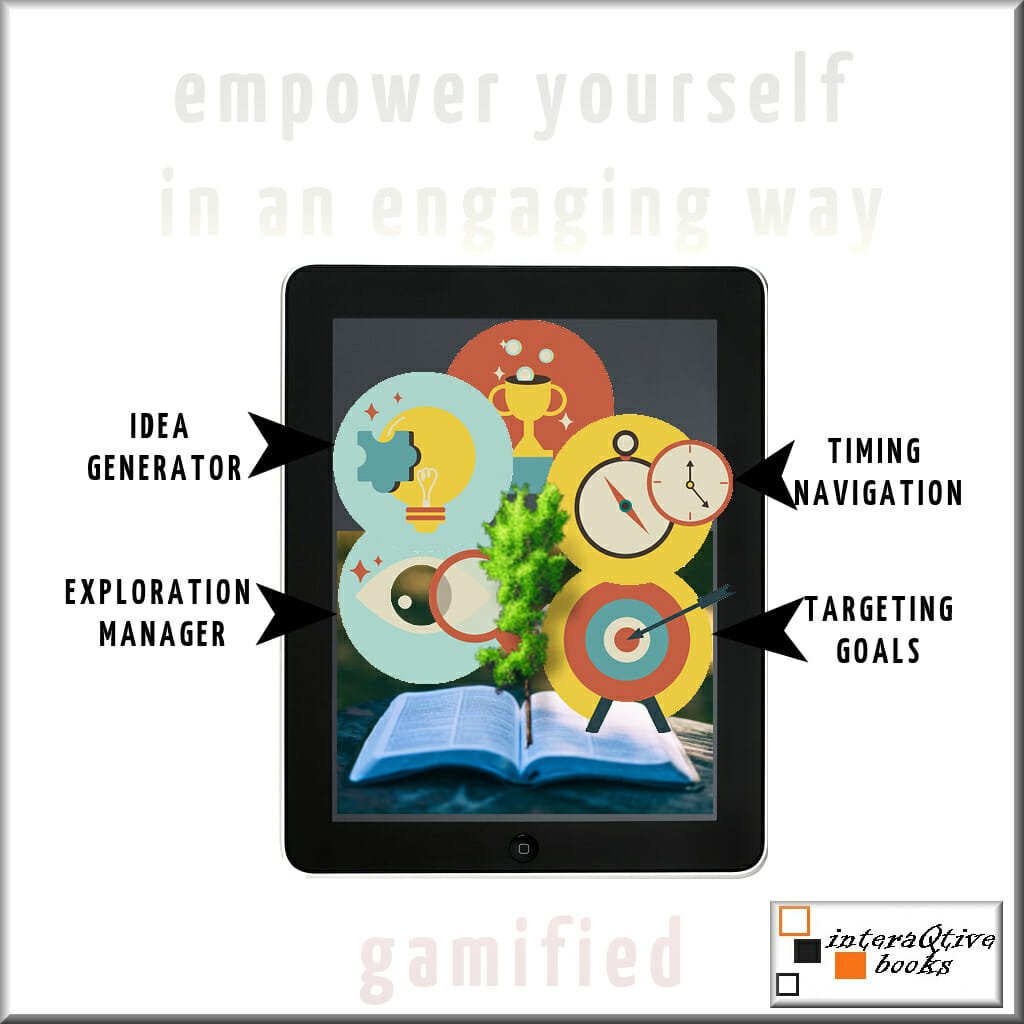 Making Use of tech

Our interaQtive books includes mechanisms for gamification as well as interactive modules where direct feedback not only can be applied to answers to simple multiple-choice questions etc. But also on stories and articles among many other things. Interactive videos, oral answers to oral questions from the interaQtive book with feedback, and image-centred activities, and building workable simulations are also available among many other things.

The new generation of digital books is a format for developing different skills, generating creativity, entertainment and engagement. Where its interactive dialogue and diagnostic approach creates significant added value in comparison to previous generations of digital books. It’s a renaissance of the book! Read more about Storyteller PublishingLab, Storyteller On Demand and Storyteller for Business 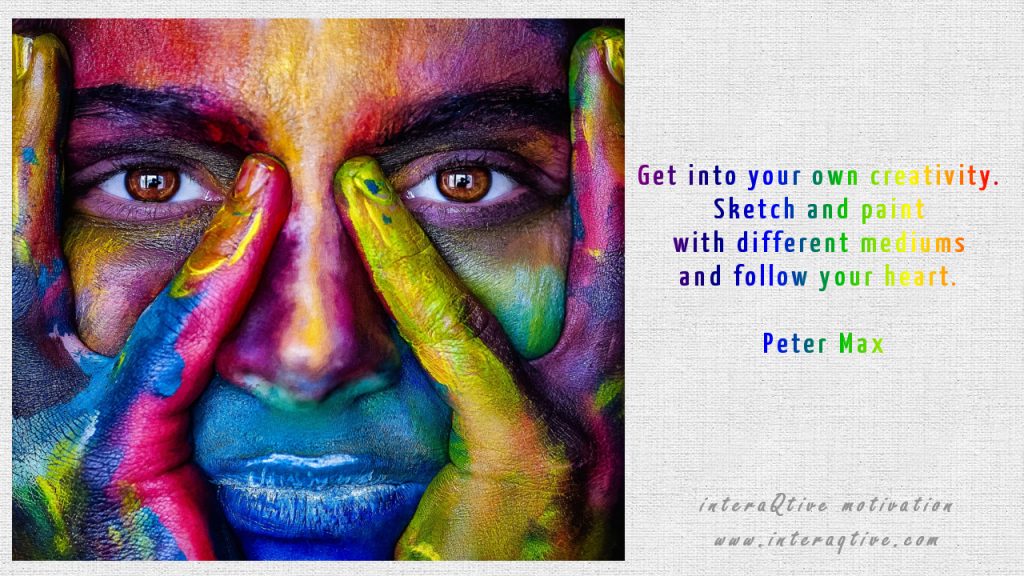 If we take the spirit of Peter Max’s words and make it digital … We did just that when we created our platform for interactive books. Where you can use loads of different media to create your unique interactive book to make your story rock. More about interactive books here and the platform here. 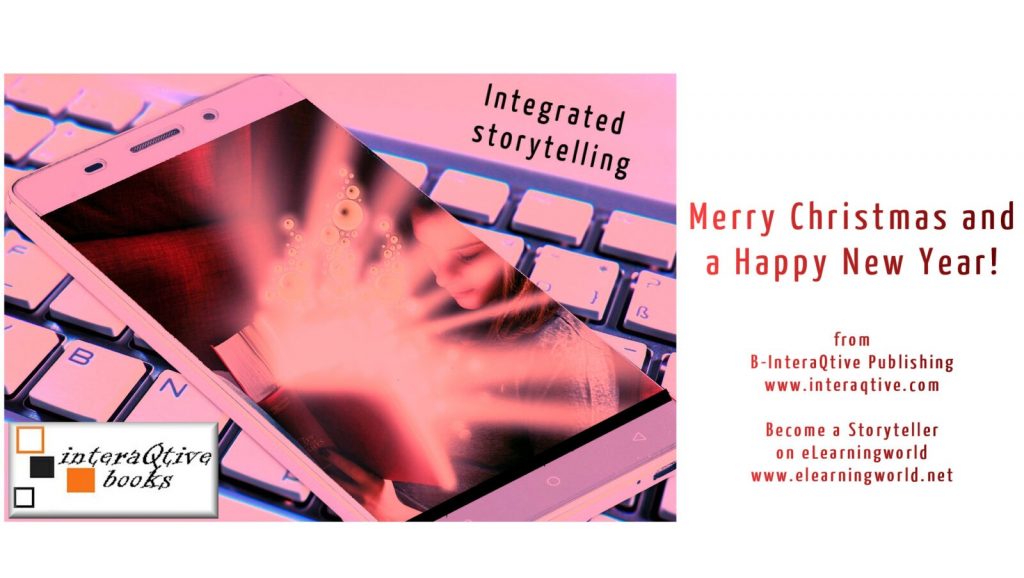 form. In addition, his scientific experimentation with exciting discoveries and descriptions for the future is also widely known. Besides this, he was a distinguished musician, which was an area where he gained a lot of inspiration, not least to give his writing a new dimension and sides. In total, five thousand written pages are preserved from his hand. There are five thousand pages of visions of especially art, science and life in general. Five thousand pages that confirm Leonardo’s ingenious and super-creative mind.

In the book Learning Design in Practice for Everybody, this has been boiled down to sixteen design codes for the development of education and learning applications. But additionally, these design codes serve as an excellent foundation for all forms of projects where creativity is the driving force. This foundation also acts as a driving force for the 6iModel, a flexible modern project management model, where purpose, development and performance are the engines, unlike traditional models, which usually tend to result in administration at the expense of creativity and innovation. Leonardo’s sixteen design codes do not just form the basis of the model, but they also serve as a guide to the reader, because design today can be applied to almost all areas that concern life, thus basically the art of designing your own reality.

Finally, as one of the many messages in the book is that Learning Design is an ongoing process, a fifth part of the book is available online, which consists of a new section on eLearningworld.eu about Learning Design. Here, interactive content, stories and analyzes that concern the subject area continually will be published for more information, click here. 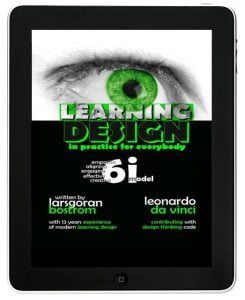 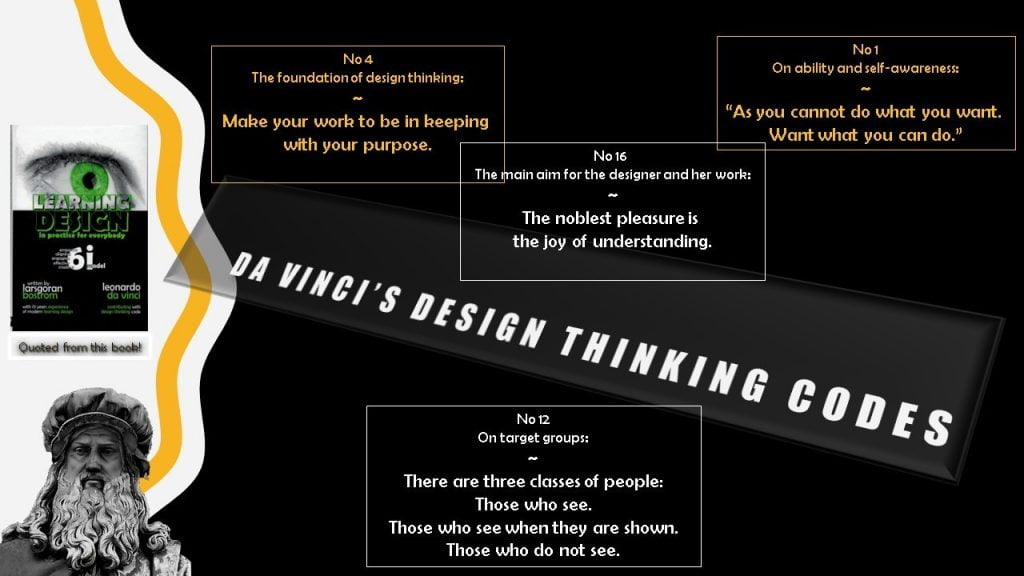 The idea of creating the 6iModel started from 16 of da Vinci’s Design Thinking Codes that manufactured with modern technology where also 13 years of the author’s experience of learning design was added. You can see the outcome in the third part of the book Learning Design in Practice for Everybody by LarsGoran Bostrom, and more importantly, use the model to optimize the work process and the result of your own creative projects.

The book is available both as ebook and a hardcover printed edition, click here to learn more.

The author also gives lectures and workshops on Learning Design and to use edtech, learn more here 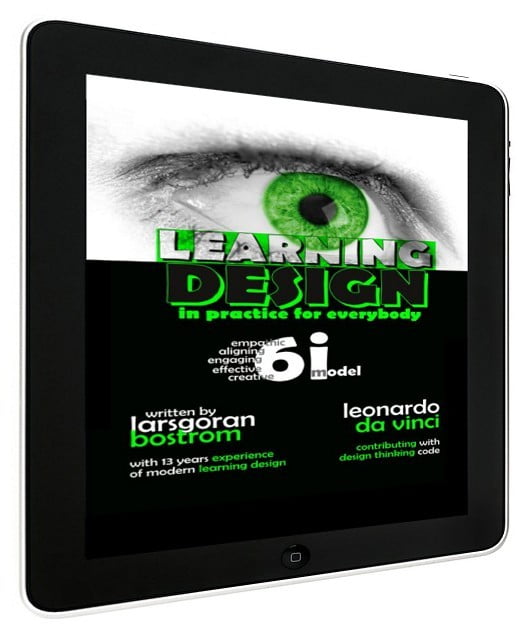 Learning is a challenge. To design a workable learning experience is even more challenging. It is like moving art with a well-defined purpose and goals. This book is intended to work as a practical guide to improve the prospects for you to succeed with your learning design project. It includes four parts, beginning with an introduction to learning design including the latest trends within the field. Then the knowledge and skills are gradually built up by describing tools to use for emphatic human-centred and efficient learning design. To in the third part exploring the 6i-model and put it into practice. The 6i-model is a framework that includes a foundation of six stages and guidance for designing excellent learning experiences and other creative projects. The last part of the book is targeting present and future prospects for you as a Learning Designer.

The focus is set on eLearning, but not in the traditional meaning of the word, since the e now stands for experience not electronic. As the old fight between digital advocates and traditionalists has lost its meaning in a human-centred approach to learning design.

In addition to all this in order to improve the visionary impact, some of Leonardo da Vinci’s eternal design ideas are presented in the book, ending in sixteen design thinking codes by the master to guide your work. 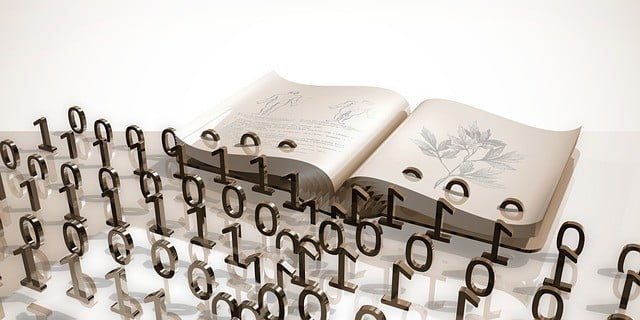 Now we are about to publish our first book, which is a collection of short stories that also sets the agenda for B-InteraQtive Publishing. The title is “Border travellers” (translated from Swedish Gränsfarare) and it is exploring timeless battles in the society like women’s struggle for liberation, religious fanaticism, the horror of war but also love beyond borders. At the same time as people, border travellers; find their own solutions, today and in history, to conquer these problems. These border travellers follow five simple values: Difference, Radical honesty, Extra value, Authenticity, Meaningful and Simple rules in order to make dreams come true. This is also what B-InteraQtive Publishing does and stands for.

From the five values mentioned above B-InteraQtive Publishing rests on three pillars; engaging storytelling, the dynamics of tutoring and different packaging of the same book to fit all people. The outcome is interactivity besides engagement and learning, and this is where our MakeIT-platform is offering a unique opportunity. Here we create InteraQtive Books where the content can include text, image, sound, video and interactive exercises. The InteraQtive Book can be published as an app for Android, iOS and Windows as well as an online course with or without tutoring tools. We offer this form of packing besides more traditional printed books, ebooks and audiobooks since we believe that content is king and the packing should be personalised. This is what modern publishing is all about.

The translation of Gränsfarare to Greek is now on its way, shortly the book also will be translated to English, and there are plans for more languages later on.

The translator to Greek who is also the publisher of B-InteraQtive Publishing, Virginia Ioannou Boström, has almost ten years professional experience of translations from Swedish to Greek as well as from Greek to Swedish. She says: ”It is a really exciting challenge to translate literature.”

The author LarsGöran Boström comments: ”It is natural that Greek is the first language that my collection of short stories is being translated to. Since it was in Greece the writing of the book took off for real and at the same time it is in this environment several of the stories fully or partly takes place. It will be really interesting to review the Greek version of Gränsfarare.”