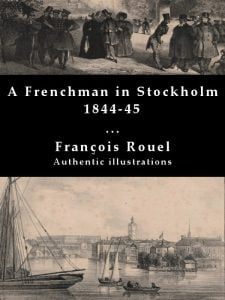 On an early autumn day in the year 1844 François Rouel and his companion enter Stockholm in order to participate in the coronation of king Oscar I. After an eventful, but not that pleasant first day as a Frenchman in Stockholm, he later writes: “On the first day of my stay in the capital, I could not imagine that I would stay for half a year that turned out to be the case”.

After the coronation of king Oscar I, Rouel begins an insightful exploration of the city’s social life, high and low, added with imaginative comparisons with his home country. The outcome becomes an uncensored story about Stockholm and its surroundings. As he is breaking the last remaining borders of the newly won freedom of expression (freedom of the press in Sweden 1809 in theory, the 1840s fully in practice). The only restriction is that he published this book under a pseudonym. This is probably also the reason why the book never was published in France (freedom of press 1881), even though the author wrote it in French.

But who was François Rouel that so successfully described the soul and life of Stockholm in the middle of the 1840s? He probably was a Parisian author that the Swedish author Karl Kullberg, that translated the book, met on his European journey in 1842.

Kullberg’s translation and comments about the experiences described are something that further empowers the book. As well as the authentic illustrations from Stockholm in the middle of the 19th Century by G.H. Mellin. We have also integrated audio as an AR-feature for the printed book if you want to listen to parts or the whole book.

The book is available to buy in Google Play Books and BiQStore, as well as in all qualitative streaming services of audiobooks, like Bookbeat and Audible etc. You can also buy it as a downloadable audiobook from e.g. in Apple Books app/iTunes Audiobooks, Audiobooks.com etc, and soon in more book stores

This website uses cookies to improve your experience while you navigate through the website. Out of these, the cookies that are categorized as necessary are stored on your browser as they are essential for the working of basic functionalities of the website. We also use third-party cookies that help us analyze and understand how you use this website. These cookies will be stored in your browser only with your consent. You also have the option to opt-out of these cookies. But opting out of some of these cookies may affect your browsing experience.
Necessary Always Enabled

Any cookies that may not be particularly necessary for the website to function and is used specifically to collect user personal data via analytics, ads, other embedded contents are termed as non-necessary cookies. It is mandatory to procure user consent prior to running these cookies on your website.